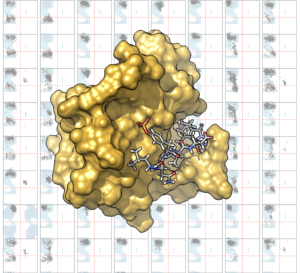 Our paper titled “Structural Determinants of Phosphopeptide Binding to the N-Terminal Src Homology 2 Domain of the SHP2 Phosphatase” has been published by the ACS Journal of Chemical Information and Modeling. By performing several μs long molecular dynamics simulations, we identified the structural determinants of high affinity/specificity ligands to the N-SH2 domain of SHP2. SH2 domains are protein-protein interaction modules involved in many signaling pathways, and therefore represent potential pharmacological targets in cancer therapy. 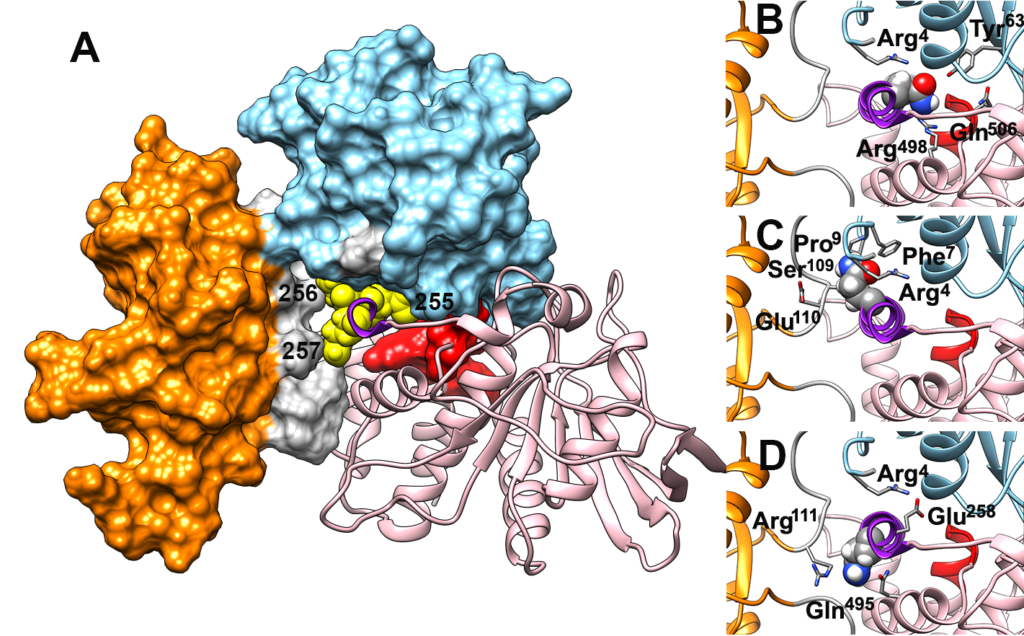 In collaboration with several institutions (Istituto Superiore di Sanità, Ospedale Pediatrico Bambino Gesù, University, Magdeburg, University of Nicosia) and with Prof. Gianfranco Bocchinfuso, of our Department, we elucidated the molecular effects of pathogenic mutations causing a rare genetic disease (Noonan syndrome). Our findings are published in the journal Human Mutation, in an article titled  Pathogenic PTPN11 variants involving the poly‐glutamine Gln255‐Gln256‐Gln257 stretch highlight the relevance of helix B in SHP2’s functional regulation.

Antimicrobial peptides (AMPs) are bactericidal and immunomodulatory molecules that kill bacteria mostly by perturbing their membranes, and for this reason they are a promising class of molecules to fight drug-resistant microbes.  Our current understanding of AMPs has been
reached by two parallel, but largely independent, approaches: microbiological studies on AMP
effects on cells, and biophysical investigations on model membranes.  In the last few years,
several groups, including ours, are trying to bridge the two worlds, characterizing quantitatively peptide behavior with biophysical methods directly in real cells.   Together with Miguel Castanho, Sattar Taheri-Araghi and Sergey A. Akimov, Prof. Lorenzo Stella is editing a special issue focused on this interdisciplinary area that is changing the field of AMPs. Several authors have already caccepted to participate, but submissions are open!

Congratulations to Paolo Calligari and Sara Bobone, members of our group, for their controbution to the fight against the COVID epidemics. Their article can be downloaded here.

Bacteria act as a heroic soldier who covers an exploding grenade with his body to save his comrades in arms.

Our article titled Binding of an antimicrobial peptide to bacterial cells: Interaction with different species, strains and cellular components has now been accepted for publication in Biochimica Biophysica Acta: Biomembranes and is online. In collaboration with the groups of Marialuisa Mangoni (Sapienza University of Rome) and Yoonkyung Park (Chosun University) we have extended our previous studies quantifying the interaction of antimicrobial peptides (natural molecules able to kill drug-resistant superbugs) with bacterial cells. We found that millions of peptide molecules must accumulate on each cell to kill it. Part of them interact with the cell membranes, while a fraction binds to other cellular components. After a bacterium is dead, it binds twice as many peptides, thus protecting the other cells from the antimicrobial action of these molecules.

Our article titled Aggregation determines the selectivity of membrane-active anticancer and antimicrobial peptides: The case of killerFLIP has been accepted for pubblication in Biochimica Biophysica Acta: Biomembranes. We have shown that aggregation  can reduce the driving force for binding to the externally neutral membranes of healthy eukaryotic cells, by reducing the water exposure of hydrophobic moieties present in amphiphathic peptides. At the same time, self-assembly does not affect significantly peptide affinity for the negatively charged bilayers of cancer cells and bacteria, which is mostly driven by electrostatic interactions. Our data indicate that aggregation should be taken into account, or even exploited, in the design of selective anticancer and antibacterial membrane-active peptides. 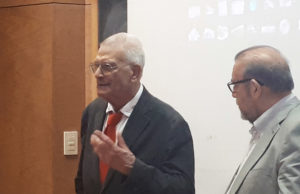 Prof. Basilio Pispisa, founder and mentor of the physical chemistry group at the University of Tor Vergata, was awarded the Bonino medal, the highest award of the Physical Chemistry division of the Italian Chemical Society. Congratulations, Prof. Pispisa! 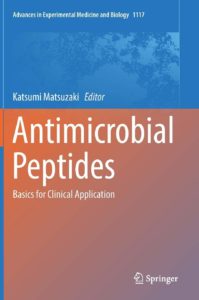 The book “Antrimicrobial peptides: basics for clinical applications“, edited by Prof. Katsumi Matsuzaki, is fresh off the press. We contribuited with a chapter titled “Selectivity of Antimicrobial Peptides: A Complex Interplay of Multiple Equilibria”

Elisa’s thesis regards a method to increase the activity and selectivity of antimicrobial peptides; Andrea and Giuseppe worked on the characterization of the oncogenic phosphatase SHP2 and Simone discussed his studies on novel antimicrobial peptidomimetics. Congratulations! 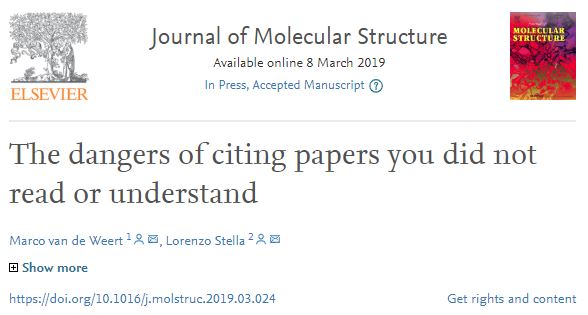 I am afraid that something is going terribly wrong with the scientific publishing industry, peer reviewing and the ethics of the scientific community as a whole. In the last years, I was surprised to find a huge number of published papers containing extremely basic and fundamental errors that completely undermine the article’s conclusions and that should have been spotted by a decent reviewing process. Together with my friend and colleague Marco van de Weert, I wrote several articles* trying to improve this situation, at least in our own research field. It is not difficult to imagine our frustration when we find, more and more often, that our articles are cited in support of the very same mistakes that we tried to correct. We discuss this issue in a paper titled “The danger of citing papers you did not read or understand” that has just been accepted for publication in the Journal of Molecular Structure.

Bobone, S., van de Weert, M., & Stella, L. (2014). A reassessment of synchronous fluorescence in the separation of Trp and Tyr contributions in protein emission and in the determination of conformational changes. Journal of Molecular Structure, 1077, 68-76.

Stella, L., Capodilupo, A. L., & Bietti, M. (2008). A reassessment of the association between azulene and [60] fullerene. Possible pitfalls in the determination of binding constants through fluorescence spectroscopy. Chemical Communications, (39), 4744-4746. 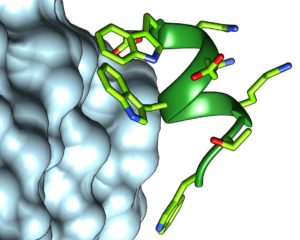 Our article titled “Rational Design of Antiangiogenic Helical Oligopeptides Targeting the Vascular Endothelial Growth Factor Receptors” has just been accepted for publication in Frontiers in Chemistry. In the framework of a national collaboration involving the universities of  Milan, Padua, Insubria and the National Research Council, we have developed short helical peptides, inspired by the N-terminal helics of VEGFC, that show antiangiogenic activity in the nM range and are resistant to proteases. These molecules are promising candidates for the development of novel antiangiogenic drugs with applications in anticancer therapy and in ophthalmology. The article is part of a Research Topic titled “Folded Synthetic Peptides for Biomedical Applications“. 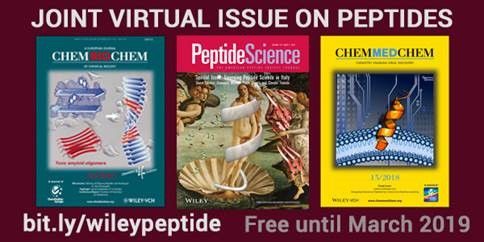 Our review titled “From liposomes to cells: Filling the gap between physicochemical and microbiological studies of the activity and selectivity of host‐defense peptides” was selected for inclusion in a joint virtual issue of ChemBioChem, ChemMedChem and Peptide Science. These three journals picked for the special collection their top articles on peptides published in the past year. All these articles are free to read until March 2019. 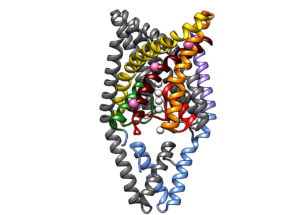 In the framework of an international collaboration coordinated by Ospedale pediatrico Bambino Gesù, our group contributed to the discovery of a new rare disease (that we named FHEIG, an acronym summarizing the main clinical features of the syndrome). Our study, published in the American Journal of Human Genetics revealed that FHEIG syndrome is caused by mutations in the gene coding for the TRAAK potassium channel. Our molecular dynamics simulations showed that mutations perturb the conformational transitions regulating the channel’s responsivenes to external stimuli. Understanding the molecular basis of a rare disease is important for early diagnosis and is the first step in the search for new diagnostic approaches.