Mechanism of action of host-defense peptides.

The emergence and diffusion of pathogenic bacteria endowed with multidrug resistance is a dramatic threat to global health and safety. Several infectious diseases, now easily treatable, could turn deadly again. New drugs against resistant bacteria are severely needed. In this context, host-defense peptides (HDPs) are promising molecules. They constitute a fundamental component of the innate defense of many organisms, including humans. They kill bacteria by interacting with their cell-membranes and forming pores. Since no association to specific proteins is involved in this process, the development of resistance is particularly unlikely. Furthermore, HDPs are able to discriminate between host and target cells, thus exhibiting limited toxicity. However, there has been no real breakthrough in their clinical application. One of the reasons for this lack of success is that several basic aspects of their function are still poorly understood. We are tackling this issue by a combination of multiple physico-chemical approaches, applied to characterize the interaction of host-defense peptides with different model membranes, bacteria and human cells. 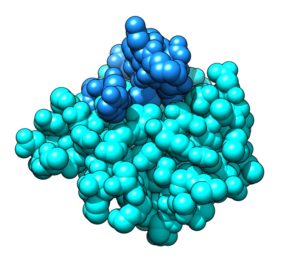 Peptide-based inhibitors of protein-protein interactions of the SHP2 phosphatase: a novel strategy against cancer and RASopathies.

Protein-protein interactions (PPIs) play key roles in biological processes such as cells proliferation, growth and differentiation. Therefore, they are promising pharmacological targets, e.g. in cancer therapy. However, perturbation of these interactions by the small organic molecules generally used as drugs is difficult, because the interfacial surface involved in the recognition process is usually extensive. By contrast, peptides and peptidomimetics are natural candidates for this task.

In collaboration with Istituto Superiore di Sanità, Ospedale Pediatrico Bambino Gesù and Università di Padova we are currently working on peptide-based inhibitors of PPIs involving the Src-homology-containing tyrosine phosphatase-2 (SHP2). This protein has a pivotal role in many signaling pathways (RAS/ERK, PI3K/AKT, JAK/STAT) and therefore in the regulation of cell growth and differentiation. Gain of function mutations of SHP2 are involved in cancer and cause severe developmental disorders collectively defined RASopathies. SHP2 plays also an essential role in regulating the activation of immune cells. 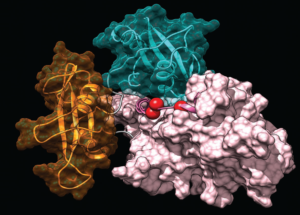 Through a long-standing collaboration with the group of geneticists led by Marco Tartaglia (Ospedale Pediatrico Bambino Gesù) and other research centers, we study newly identified mutations linked to different rare diseases. Mostly through modeling and simulative approaches, we investigate the effects of the amino-acidic substitutions on the conformation and dynamics of the affected protein. These studies are essential to elucidate the molecular mechanism of genetic disorders, and are instrumental to the research on possible therapeutic approaches.